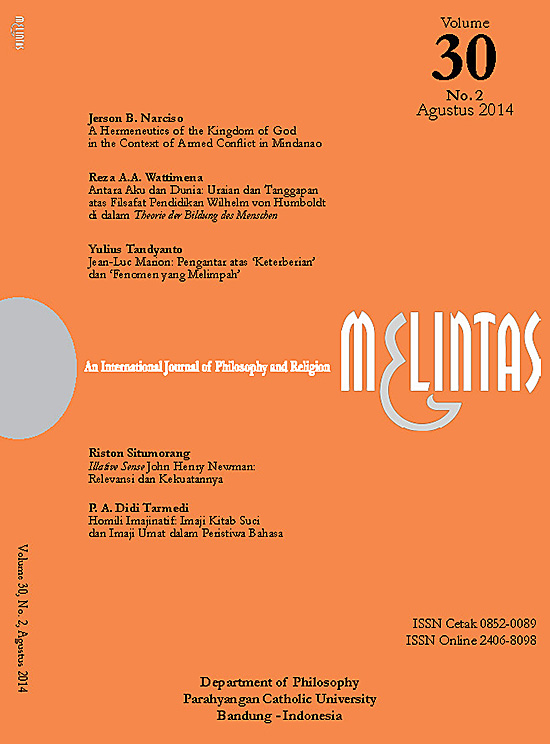 Perhaps one of the dangerous things in method development is intolerance. Some might feel shaky when assuming that everything is allowed in discussing knowledge apprehension. However, fear of this all-permitted access to knowledge has sometimes been hammed up. Elitist would want to incarcerate methods to a few people and soon after that the stigma of intellectual heresy, or ‘uncommonness’ if you like, is attributed to those seeing from different perspectives however rewarding their methods are. Methodological intolerance is a warning light to any thinkers who might have devoted knowledge only to the mainstream. Why is method development so late? Intolerance. If there is any ‘people power’ in philosophical and theological thoughts, this, as anticipated, cannot bring up only a few. The method of most people – again, if there is any – needs some of the most tolerant thinkers in the world to formulate and this will be against the mainstream. Yet after that it still has to face the judgement of the few. Sad.

Melintas is always crossing. It does not want to curb the exuberance of method exploration. In exploring methods, this edition presents different perspectives in tolerance with what happen and are experienced among the peoples and the cultures. These might have their own avenues and approaches that we cannot ridicule as not methodological. We will be enriched through the rereading of the biblical Kingdom of God within the context of armed conflict in Mindanao, the Philippines. The author raises the issue of how the kingdom of God which embodies God’s love, peace, liberation and justice should be understood and concretised in a way that it could inform and influence the different religious groups and organisations involved in the peace process. Wilhelm von Humboldt’s philosophy of education will be discussed for the development of one’s integrity. When interpreted and applied critically, Humboldt’s ideas of education may contribute a great deal to the development of educational system as well as philosophy of education in Indonesia. Another article will discuss Jean-Luc Marion’s ideas that incorporate a phenomenological method to move towards philosophy of givenness and the saturated phenomena. Marion’s phenomenology allows us to describe any phenomenon in the form of, or order of, the other. Joh Henry Newman’s idea of the illative sense will be explored as a way of explaining the sensus fidelium, which is based not simply on the intellect but also on the logic of the heart. Newman’s illative sense is regarded helpful to understand the believers’ way of apprehension in matters of faith, for they might have adopted a particular way of apprehending the objects of faith. A particular discussion on the imaginative preaching in the Christian liturgy will be presented in the last article. A homily is a space that captures various images from the Scriptures as well as from the believers’ experiences and paints them through the verbal language, which is used not only to ‘explain’ something already known by the hearers, but to present a figurative language that may open the horizons.

Enrichment is a promise to experience only when these articles are skimmed through with tolerance to the methods of the peoples. These approaches are first of all making sense to those that are not always with the mainstream. They often do not need our judgement, but instead apprehension. Theories are what we formulate. Methods what we live by.