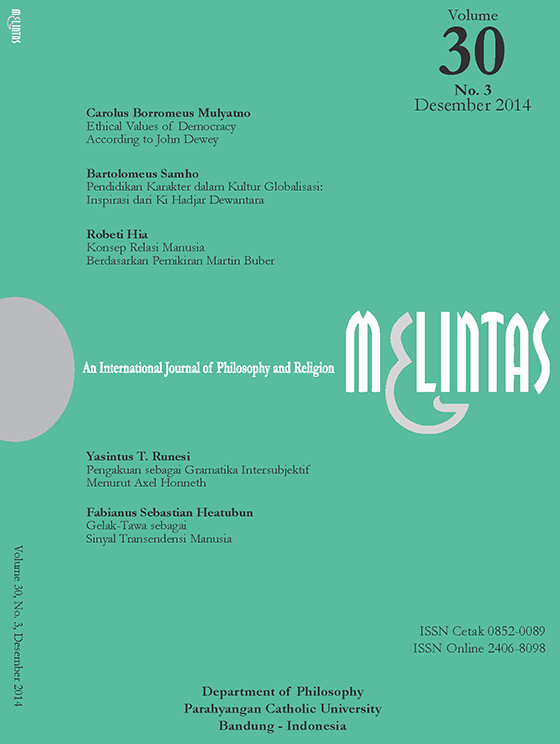 Is laughter rooted in humour? Put it differently. Should our expressions originate from values? Again, differently. Must there be reason for our being (alive)? Nonexisting black cat in a pitch black room. Mind can trace whatever into the logic of being. All this game might be nothing in the end. But the end itself is not an end. Philosophy for philosophy, if there is ever, is simply a game we have never played as being played by whoever we sigh as ‘the other’. What do we say again, about what value is? We really like to be admired with those oomphs and zings when we – philosophise. Not everyone would be happy, but it is a kind of intriguing. We know that something is wrong. There is a gap, again. There is a forever halt between our presence and our reason.

This edition of Melintas questions connections. Ideas can always be challenged by facts, and values by living actions. The first article explores John Dewey’s ethical values of democracy. The idea is that he does not only look for the solution of the problems of democracy, but also put democracy in living process. Actualisations must be sought through education. The second brings forward character education within the globalised culture. One of the keywords is ‘balance’ in assisting the growth of a person towards the so-called and hoped-for good characters. The author raises the thoughts of Ki Hadjar Dewantara. The third article relates a person to other persons based on Martin Buber’s notion linked to Emmanuel Levinas. Relations are brought back to the context of human being and meaningful relationship. We are not objects, undoubtedly. The fourth will table Axel Honneth’s thought that the theoretical foundation of intersubjective relationship is not only based on human communication dimension, but also the recognition dimension. The latter is not so much about communication method as a witness that we are just here. The fifth article will walk us through the path of laughter as a signal of transcendence, a call to be ‘humanum’, to be authentic, complete, and true human being. When we laugh, we live through our most fundamental life, if not also the sacred moment of blending with the divine. Are not these about our being present, rather than only reasonable? When bridging persons, philosophy can be brainless.

So what are values, again? The black cat was here. We just missed it. But most important is that we are au fait. We sense the traces and touch the surface. No one can be present intellectually, but indeed humorously. We do not need five seconds to answer the most difficult question in our life. Just smile. They can see us. You are recognised.