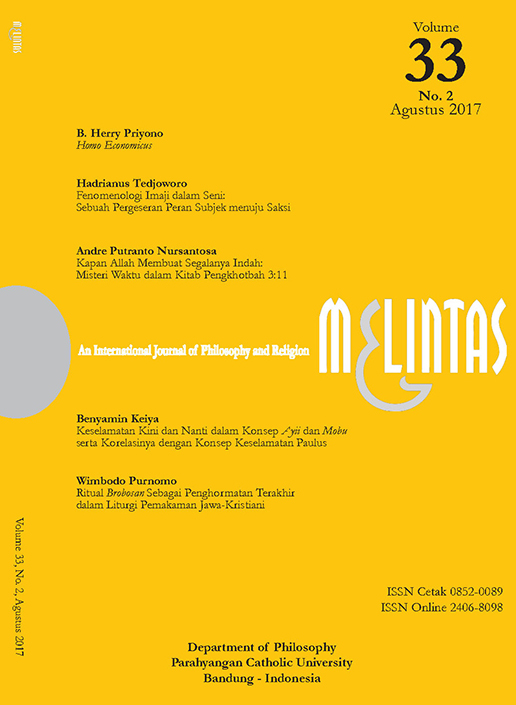 So many illusions. But that is just a thought. And as long as we think, things might not appear as they are. From the outset of everyone’s eagerness to think, there has been this instinct to distinguish this term from that term. We simply cannot perceive anything in this world, for when trying to tell others about our experience of it, we fall back into the trap of terminology. We cannot live with others without communicating, and thus the distinguishing mind is justifiable. We need not frown upon these terms, however exhausted our mind is in using them, for these are worth the time we spend to live our mind.

Something inside us pushes the mind to reflect upon the meanings conveyed through conversations. Melintas gives way to it. This edition cultivates reflection and distinction, as well as contemplation and action. The first article reflects upon the idea of homo economicus, which was originally a particular point of view about humans but later turned into a claim about the whole of human nature. The author argues that it is not the economic beings that gave birth to economics, but the economics that created economic beings. The second article shifts the focus from concept to image. Phenomenologically speaking, art is a sort of lectio imaginem, an experience of reading and not merely interpreting the image. Each artwork is transcendent, as it were, since every time it will speak differently to a person when reencountered. The third article contemplates time biblically, especially when people think that there is good time and there is bad time. The author argues with the help of the Book of Ecclesiastes, that God has made every thing beautiful in its time, and that each point of time is theologically beautiful. The fourth article discusses the concepts of salvation according to the Ekagii people in Papua, Indonesia. The author correlates these concepts with that of Saint Paul, especially in his escathology. Paul’s tension between the terms ‘already’ and ‘not yet’ is different, but in some sense similar to the cultural concepts of the Ekagii people. The fifth article speaks about how some culturally meaningful rituals can be integrated into the liturgy. The author shows how the Javanese funeral ritual of brobosan could be seen as a pastoral means to foster the faith of the believers and at the same time to evangelise the gospel. The funeral is seen as an entrance for inculturation, bringing Christian liturgy towards the local culture and vice versa.

Our minds distinguish terms and meanings. Even if what appears to our perception is the so-called illusion, we need it as well. This tension in our way of experiencing reality and communicating our ideas keeps the conversations alive. Our minds are alive. In reality.