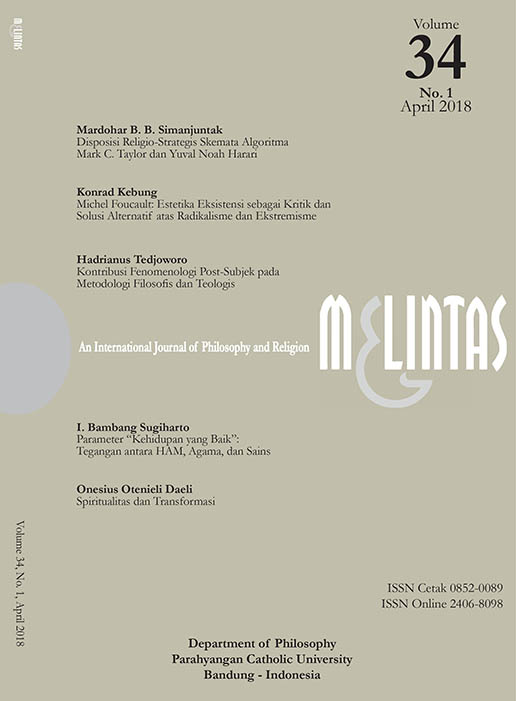 When changes dominate our reality, there are people who are still petrified of them. Being frightened of change could be compared to being afraid of the reality itself. We have a very long philosophical history of the self and even this very moment is not its conclusion. Why should change be frightening? So much for the ideal formulation of the self that just brings us more and more distant from our ‘self’. Some might sense that this awareness is more aristotelian in character, but we could say that changes are the reality and reality is actual in changes. There is no sense in judging any change in our society.

The realness of life we live by day after day might not so much change us as teach us who we are. This edition of Melintas brings us different perspectives. The first article brings the question of how the self – central to epistemological inquiries – be justified by the presence of consciousness. Constructing answers to this colossal undertaking of religious identity invites a thorough understanding of how human beings can be taken as conscious. The second article presents Foucault’s philosophical thinking on the constitution of the self as the peak point of all his works from his early writings through his last writings, lectures, and seminars. To Foucault, this particular “self” should be seen as a result of a work of art that is ordered and engraved creatively and continuously. The third article discusses how Jean-Luc Marion pushes phenomenology to its limits, to the extent that he is suspected of undermining the role of the subject in contemporary philosophical discourse. However, Marion is quite consistent with his phenomenology, namely in offering a way out for the subject to be a witness. The author seeks insights for the benefit of philosophical and theological methodologies. The fourth article sees how the Declaration of Human Rights is universal in character – hence they can become a point of convergence among different religions – but is also susceptible to political manipulation, and subject to criticism from particular religious perspectives as well as from scientific outlook. Meanwhile, atheist scientists come up with a point of view which they claim to be more neutral and objective as far as it concerns the ideal of ‘good life’. The fifth article talks about spirituality that transforms human beings. It is not only associated with humans’ internal desires, but also something that leads them to use, develop, and optimize various other materials and cultures that could be treasured around them. Spirituality is a power to create a better life – an identity in action.

The self changes. Reality is change. These perspectives are indispensable in our life in this world. Even if we are still unsure in accepting our ‘self’ or the reality itself, we could just shift a bit from where we stand. Yes, shift.