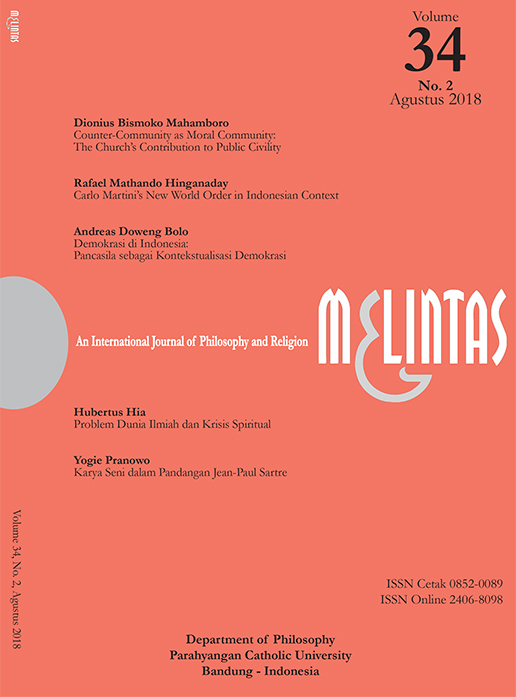 Being a nation is more than a matter of identity, let alone a matter of religion. We do not introduce ourselves to others starting with a nationality. But belonging to a nation shapes our images of who we are and of our personhood. We might be learning things about ourselves precisely when telling others about who we are in what we are doing at the moment. Then comes the emotion. People smile. We are happy and settled when connected to the differences surrounding us. Everyone needs a place.

This edition of Melintas brings philosophical and theological reflections on finding ourselves through community, dialogue, politics, science, and art. The first article shows how Christian communities can develop themselves into ‘counter-communities’. This article is aimed at discovering the relevance of the idea ‘counter-communities’ to the problems of coexistence of different religious followers in the Post-New-Order era in Indonesia. The second article introduces the views of Carlo Maria Martini, who, as a Catholic bishop, has promoted the idea of creating a society that supports diversity to be a new world order. The author relates them to Anthony Giddens and Raimon Panikkar, and finds how Martini’s ideas can be practised not only by inclusivists and pluralists, but also by exclusivists. The third article portrays the dynamics of democracy in Indonesia, both in its formal settings and as a building that allows humanity reach its dignity. Pancasila Democracy can be a space for a change towards Indonesia that is more animating to the spirit of divinity, humanity, and nationalism and towards a society with solid physical and spiritual well-being. The fourth article sees how the spirit of modernism to question and to break down nature, religion, and tradition under the pretext of pragmatic utopia of growth has brought humanity into an alarming phase. It refers to Fritjof Capra when saying that that the main problem of the existential crisis of modern humans is caused by the crisis of perception, mainly with the influence and errors from science as well as from Cartesian and Newtonian thoughts in perceiving the reality mechanically. The fifth article refers to Sartre when offering a notion of analogon, that has a key role to explain his concept of imagination. The author goes further in explaining Sartre’s concept of irreality in artworks, of which analogon is a medium or a material vehicle. A person’s imagination plays an important role in his or her presence before an artwork.

Will we find our place? At any given moment. Otherwise, there will be no reflection anymore in our imagination to play with. It is not wrong to be grateful of our nation. It has been our place to live. Thank God we can find some happiness in realising who we are.