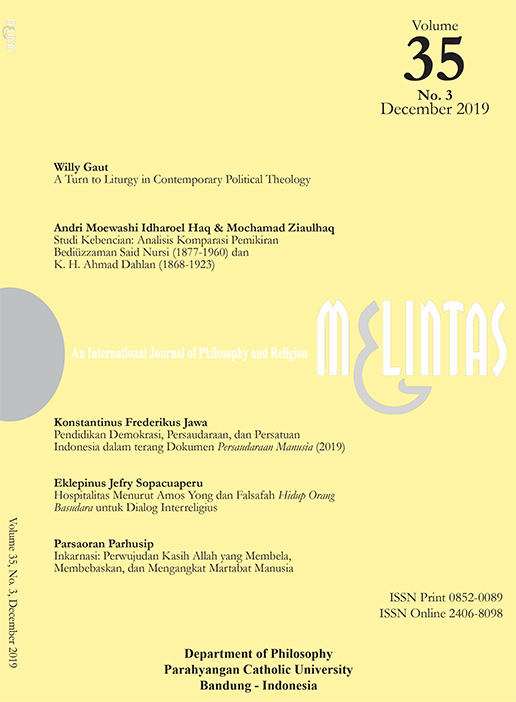 Democracy and religion seem to find it hard to make friends. But who knows? Sometimes politics and theology are about perspective. When reflected on from a particular perspective, public policies and doctrines might shake each other’s hand. We know that a term as strong as ‘belief’ can be catastrophic in discussion, but yet is often taken for granted without further realisation. It might depend on what really matters in our life: to win a debate or to live together happily. It is not an oversimplification, since, again, it is a matter of perspective.

Writings are perspectives that require our engagement with particular texts. We do not have to agree to the ideas, but we can see from different viewpoints. This edition of Melintas brings forward some themes in theology, politics, interreligious dialogue, and human dignity. The first article shows the turn to liturgy in contemporary Christian political theology. The political nature of the Church and its political role wells up from its identity as the sign and instrument of the Kingdom of God, and as such, in its political engagement, the Church is not considered merely as a social or voluntary organisation. The second article does a comparison of thoughts and movements of two Islamic figures who are significant in ‘Muhammadiyah’, namely, Bediüzzaman Said Nursi (1877-1960) in Turkey and K. H. Ahmad Dahlan (1686-1923) in Indonesia. It shows how hatred was transformed into nonviolent practices by these figures. The third article sees democracy education, fraternity, and unity in Indonesia in the light of the “Document on Human Fraternity for World Peace and Living Together” (2019), signed by Pope Francis and Sheikh Ahmed el-Tayeb. The fourth article explores hospitality according to Amos Yong as the basic character needed in developing interreligious dialogues. The author discerns the local wisdom phrased as Hidup Orang Basudara as a characteristic of hospitality that can be used to develop interreligious dialogue in Molucca, Indonesia. The fifth article reflects on Christian incarnation as an event of manifestation of God’s love in defending, liberating, and elevating human dignity. This event of incarnation brings the image of the Church as God’s people who are liberated while still in pilgrimage on earth. The authors of these articles invite us to see from different perspectives in order to able to live together as human beings and to share our views.

Others’ views are enriching and liberating. By sharing our different views, we are not so much contrasting ideas and debating beliefs as building a liveable place to meet each other as guests. Everyone is a guest in this world of shared perspectives.