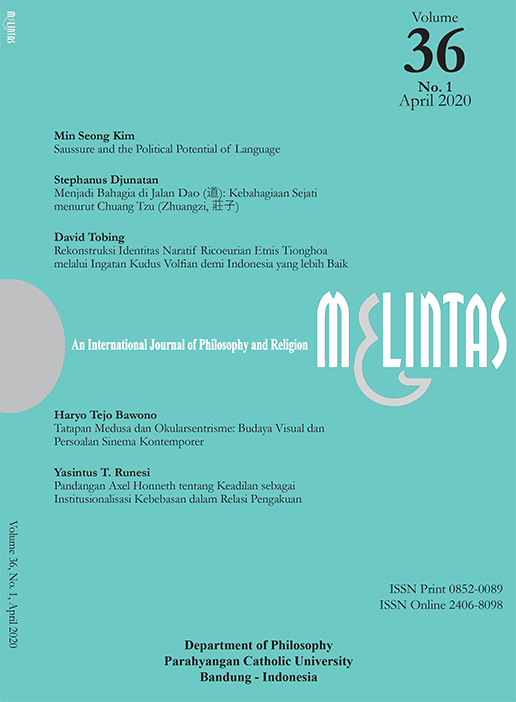 Image is language. Language is image. Today identities are characterised by the universe of images and words. Plurality turns into madness of things in reality that often cannot be perceived sanely anymore. How would Aristotle respond to all this? Back to particularity? Or, back to the Anima? It is tongue-in-cheek that everyone seems to satisfy his or her own narcissism by way of expressing thoughts, while the Anima imagined by Aristotle might refer to a humanity consisting of identities rather than to myriad of created personalities.

Our efforts in expressing ideas sometimes complicate life matters like never before. However, it is always our own choice to read or not to read. This edition of Melintas leaves the choice to the reader’s imagination. We do not have to read, as long as some insights have been keeping us alive. The first article offers a reconstruction of the social and political dimensions that were present within Ferdinand de Saussure’s theorisation. The article explores the historical development of the concept of discourse to unearth the political potential of language. The second article explores the thoughts of Chuang Tzu (ca. 369-286 BC), who elaborates cognitive and intuitive sides of human mind and offers a philosophy in order to bring forward an awareness of reality as itself. The article shows the conjunctions of cognitive and intuitive capabilities of human mind, as well as its rational and mystical sides. The third article offers a way to reconstruct a Ricoeurian narrative identity as the form and a Volfian sacred memory as the content, in order to transform the Chinesse narrative identity in Indonesia from a victim or a wounded self into a survivor or a healing self. The fourth article invites the readers to be aware of the negative inclinations around the issues of image and ocularcentrism in the contemporary visual culture, and offers some philosophical interpretations towards the conception of a ‘moving’ image. The fifth article explores Axel Honneth’s normative reconstruction of social liberty as discussed in his book, Freedom’s Right, and offers the idea of justice as institutionalised freedom that may enlarge the individuals’ horizon of solidarity as future citizens. These articles dwell into the particularities of images and language that shape our identity within the reality.

In sensing the reality we live in, we might want to reimagine ourselves as a singular Aristotelian Anima of humanity that is always moving with and interconnected to the universe. We do not want to let our rational thoughts complicate the simplicity of our identity and the givenness of Being.