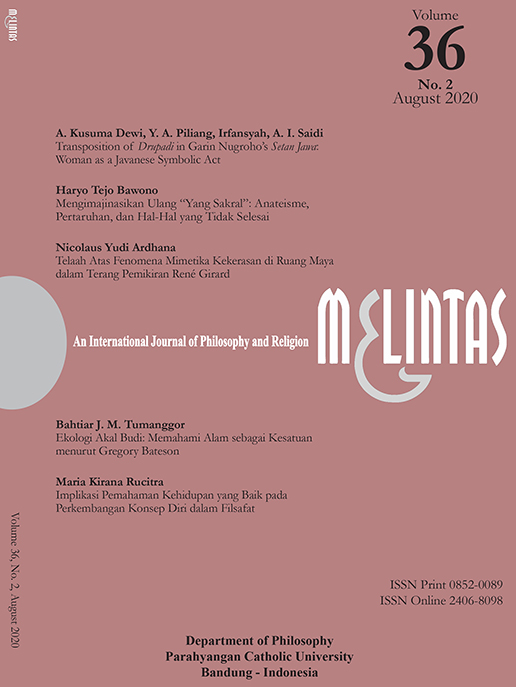 Grammar and order place us on track. Methods keep our discussions progress on each respective framework. What about layers? Two-dimensional map might be enough for some people to live their daily reasoning activities. However, layers of reality have been ‘there’ all the time, if only one is willing to shift his or her vantage point. Not everyone really cares for it. It is truly remarkable that all these layers are given, regardless of our responsiveness to them. When or if we are aware of their reality, veering from one layer to another is a challenge we might not want to miss. It is us who create grammar and order. While chaos is not always the case if those conditions are not met, layers of reality can bring mind-opening voyage.

We can veer from one layer to another layer of phenomena. This edition of Melintas offers some journeys through the perceptions. The first article uses textual analysis to identify the transformative adaptation of a character in Javanese wayang cultural narrative in Garin Nugroho’s Setan Jawa film. The author sees a different representation of the character to the conventions in the Javanese culture. The second article reimagines “the sacred” in the light of Richard Kearney’s anatheism related to the concepts of wager and unfinished matters. Humans do not need to separate the sacred from the so-called sensus numinis, because their lives, bodies, minds, and actions are esentially sacred. The third article sees humans’ naturally mimetic character on violence in the internet and cyberspace in the light of René Girard’s theories. Its author attempts to offer some alternatives to respond to the situation of violence in the cyberspace and the internet, by promoting humans’ critical and creative role as “positive imitator”. The fourth article asks our attention to the ecology crisis resulting from the speeding of human civilisation with its sudden jumps on science and technology. It offers Gregory Bateson’s epistemological ideas to offer systemic paradigm that can be used to sense nature as oneness of system leading to the concept of sacrality of the earth. The fifth article attempts to unfold the problems around human being’s ‘center’ and their implications to the concept of self. The centered self understood in the light of Aristotle and Kant holds a possibility of ignoring historical and cultural values which play the pivotal parts of a human being’s constitution. The decentered self understood in the light of Richard Rorty tends to impact the clarity of the self’s path along with its purposes.

We never know what is beneath and above our often two-dimensional outlook, for our mind might have worked through the layers of the reality. We need to keep grammar, order, and methods in our line of reasoning, but an opening to the parallel tracks of perception will not hurt our commitment to the academic discussions.