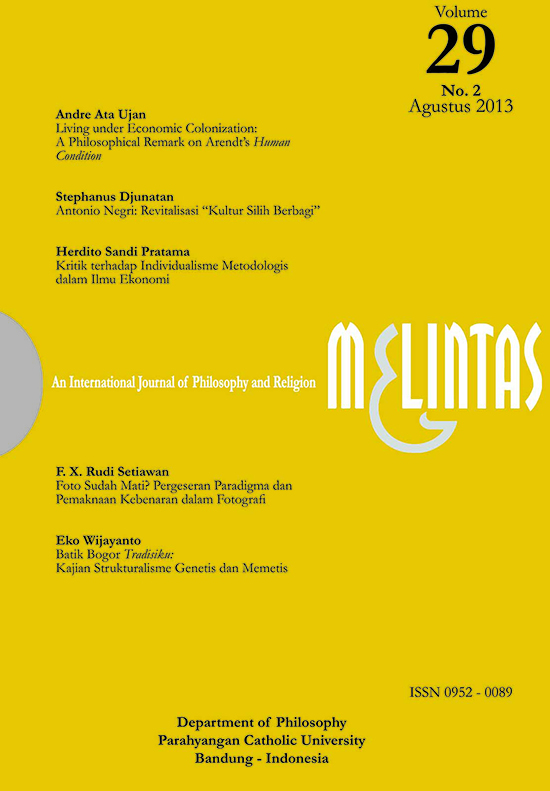 Economy and sharing, would they be reconcilable? If truth is to be told hermeneutically, our discourse must be done in movement. The act of sharing cannot be talked about. It is an a posteriori which truth always comes late when put in discourse. An economy of sharing, as it were, might be efficacious when more and more actions are brought closer to discourse and vice versa. Sharing cannot stand under experience only. Sharing is the discourse in its essence, for every partition in our knowledge, like in a hard disk, parcels the same power supply. Some argue about the individual in our economic world, and some other would rather cross any rationalisation to emancipate the capital. The latter are in fact discoursing with ‘the other’, realising that any discourse cannot happen when I is only me. An economy of sharing is everything about we, all joking aside.

This edition of Melintas puts our economy into the actions. We know that truth is always plural, not because it does not like singularity; it just cannot help staying with itself. When those economic actions are discoursed, truth interrupts. A philosophical remark on Hannah Arendt’s Human Condition uncovers life under economic colonisation. Arendt’s insistence on direct participation in political life has reminded us that citizens must be able to take care of their own desires and interests. A revitalisation of a ‘consecutive sharing’ principle in the light of Antonio Negri is put forward. Negri’s account of the power of sharing of the multitude reminds us in order to revitalise the capability of sharing within our cultural heritages. A critique towards the concept of methodological individualism in economics is presented to distinguish it from political individualism. The aim is to open further possibilities for other methodology in economics. In the age of digital sharing, photography is reconsidered within the potentiality of a paradigm shift and the interpretation of truth. Perhaps “photography is dead” only if it is considered as a representation of the reality. Photography may not die if it is seen poetically as our interpretation of reality. A genetic and memetic structuralism study is employed on the social cognition process of ‘Batik Bogor’ considered as a particular social ‘action’ due to its tendency to create and develop its own distinction. These articles are of economy, sharing, and truth as captured in the society and the media. We all share the same power supply, that is, the energy of the world we live in. And this energy is not merely about capital.

Doing philosophy from actions is part of the movement in the whole idea of sharing. Pluralism is not a threat. It is a help. Our ways of photographing the movement of the truth are corroborated by the multitude around us. We may see each other’s exposure, for exactly in the flicker and manoeuvre towards ‘the other’ we are transforming from simply me into the vigour of we. This philosophy entails every movement to subsist, that is, to be there but always in relation to the other.