This article elucidates the importance of Indo-Pacific in maritime security today. In the 21st century, the region has gained the world’s attention due to dramatic growth of China’s economy, steady rise of India, the more proactive regional countries, and the increasing oil exports to the region. With such importance, the region has been contested with powerful nations, such as China, India, Australia, Japan, the Southeast Asia nations, and even the United States. China’s increasing military presence in Indo-Pacific has been perceived as assertive by some of the regional countries. Meanwhile, the United States has become a more prominent actor in the region since the application of Rebalance policy in 2012. The paper discusses the issues, challenges and prospects of maritime security in Indo Pacific.

Book with an author:

This journal uses Creative Commons license (CC BY). We allow readers to read, download, copy, distribute, print, search, or link to the full texts of its articles and allow readers to use them for any other lawful purpose. The author must be aware that  the article copyrights will be fully transferred to Jurnal Ilmiah Hubungan Internasional only if the article is accepted to be published in the journal. Authors are allowed to resend their manuscript to other journal or intentionally withdraw the manuscript only if both parties (JIHI and Authors) have agreed on the related issue. Once the manuscript has published, authors are allowed to use their published article under Jurnal Ilmiah Hubungan Internasional copyrights. 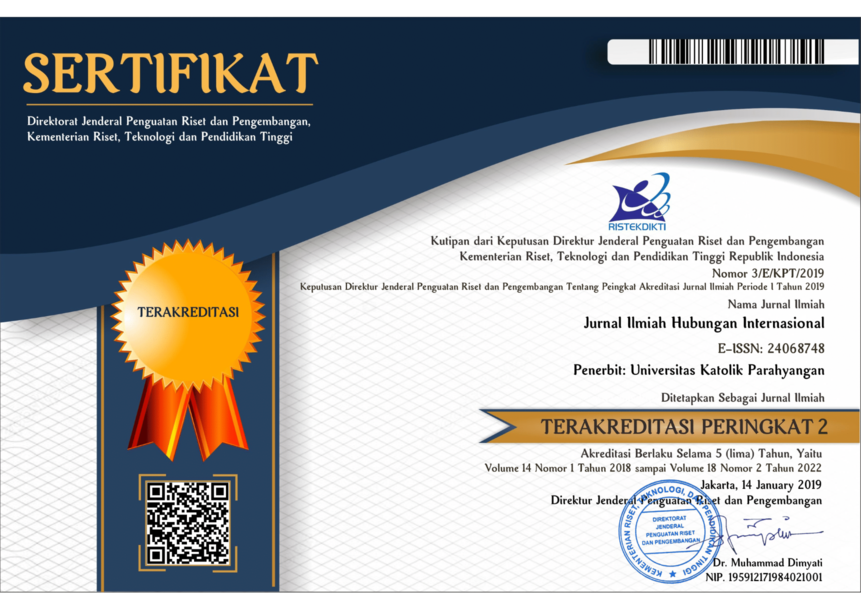